I signed my first book deal at 40. Prior to that, I’d spent my entire adult life feeling like a writer, knowing I was a writer but being too embarrassed to tell most people that. I wasn’t published, so it wasn’t real. It was just a dream, something in my head.

I cover some of the reasons for this in yesterday’s article ‘you can only call yourself a writer if you’re published’ – but this made me think about what it was like for me after I was published.

My debut was picked up by a small traditional publisher and I was over the moon. It was everything I’d ever dreamed of. Did I feel more of a writer after I was published than before?

Honestly? Not really. I simply moved the goal posts.

I didn’t have an agent yet, so could I really call myself a real writer?

I wasn’t with one of the big 5 publishers, so could I really say I’d made it?

You see the problem. Being a writer is an inherently insecure business, I think.

I see it on Twitter’s #writingcommunity. So many writers calling themselves ‘wannabe’ writers in their bios, slightly embarrassed or ashamed. They aren’t published yet, so feel like charlatans, like they shouldn’t be in the space.

Here’s the thing: every writer is an unpublished writer at some point. Some writers are published and lose their contracts. Many writers self-publish. All of us are writers, whatever the stage of the journey.

3 novels in, I’ve accepted the fact I’ll never feel like I’ve made it, there will always be another hurdle, another rung of the ladder to climb. An agent to get, a bigger publisher to aspire to, a TV adaptation to secure.

There’s always going to be something that makes me feel like I’m not a ‘real’ writer.

Except I am a real writer and – more importantly – so are you.

When I was 11, tapping away on the electric typewriter that I made my parents buy me, I was a real writer.

When I was 15 and was  supposed to write an essay about the role of slavery in the novel Jane Eyre and instead I wrote a short story about a crashed spacecraft carrying slaves, I was a real writer.

Being published didn’t make me a real writer and it won’t make you one either. You’re already one. 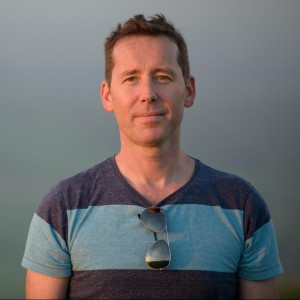 Nigel’s debut novel Beat The Rain was a semi-finalist for Best Debut Author in the Goodreads Choice Awards 2016. His second novel The Pursuit of Ordinary was a finalist in the People’s Book Prize for Fiction 2019. It was also one of the 8-12 titles ‘called in’ for the Man Booker Prize, a first for his publisher. It was also long-listed for The Guardian’s Not The Booker Prize. His third novel will be released in September 2022 and is now available for pre-order. Nigel brings his own experience of the trials of getting published, building an author profile and marketing his own novels to AuthorSpark. As well as co-founding AuthorSpark, Nigel co-founded digital marketing agency and employee advocacy platform We Are Togethr alongside Andrew, alongside online content sister company Togethr Lab. Prior to that he was a newspaper subeditor and a writer and editor for Channel 4 Interactive.

This site uses Akismet to reduce spam. Learn how your comment data is processed.

"The kind of marketing that will get done is, for the most part, the kind that’s enjoyable."